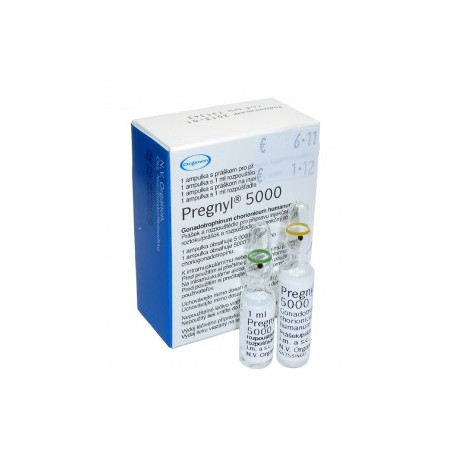 By buying this product you can collect up to 3 loyalty points. Your cart will total 3 points that can be converted into a voucher of $0.46.

This drug is not a steroid but it is widely used in athletics today. HCG is a natural protein hormone secreted by the human placenta and purified form the urine of pregnant women.

This hormone is not a natural male hormone but mimics the natural hormone LH (Luetinising Hormone) almost identically. This LH stimulates the production of testosterone by the testis in males. Thus HCG sends the same message and results in increased testosterone production by the testis due to HCG's effect on the leydig cells of the testis. Normally this HCGis used to treat women with certain ovarian disorders and it is used to stimulate the testis of men who may be hypogonadal. Athletes use HCGto increase the body's own natural production of testosterone which is often depressed by long term steroid use. Also when steroids are used in high dosages they can cause false signals to the hypothalamus that results in a depressed signal to the testicles. Over a period of weeks of this depressed signal the testicles ability to respond to any signal from the pituitary becomes very weak, which results in testicular atrophy. To avoid this athletes will use HCGto keep an artificial signal going to the testis and preventing testicular atrophy.

When administered, HGC raises serum testosterone very quickly. A rise in testosterone firs appears in about two hours after injecting HCG. The second peak occurs about two to four days later. HCG therapy has been found to be very effective in the prevention of testicular atrophy and to use the body's own biochemical stimulating mechanisms to increase plasma testosterone level during training. Some steroid users find that they have some of their best strength and size gains while using HCG in conjunction with the steroids. This may wee be due to the facts that the body has high level of natural androgens as well as the artificial steroid hormones at that time. The optimal dosage for an athlete using HCG has never been established, but it is thought hat a single shot of 1000 to 2000 IU per week will get the desired results. Cycles on the HCG should be kept down to three weeks at a time with an off cycle of at least a month in between.

For example, one might use the HCGfor two to three weeks in the middle of a cycle, and for two or three weeks at the end of a cycle. It has been speculated that the prolonged use of HCGcould repress the body's own production of gonadotropins permanently. This is why the short cycles are the best way to go. The side effects from HCGuse include gynecomastia, water retention, and an increase in sex drive, mood alterations, headaches, and high blood pressure. HCGraises androgen levels in males by up to 400% but it also raises estrogen levels dramatically as well. This is why it can cause a real case of gynecomastia if dosages get too elevated for that person. Another side effect seen from HCGuse is morning sickness (nausea and vomiting).

There have been no cases of overdose complications with the use of HCG nor have there been any associated carcinomas, liver or renal impairment. HCG was at one point looked at to see if it could carry the AIDS virus, due to the fact that it is biologically active, but the latest word is that this could not be possible in any way. So we see how HCG be used by athletes to avoid some of the problems associated with abruptly stopping a steroid cycle.

This product is also not picked up on steroid tests, so some athletes use it to keep androgen levels high before a contest that has drug testing. HCG must be refrigerated after it is mixed together, and it then has a life of about 10 weeks. It is taken intramuscularly only; this drug is often available by order of a physician if you show symptoms of hypogonadism. It is hard to find on the black market.

Pregnyl, or human chorionic gonadotropin (hCG). is a highly purified preparation obtained from the urine of pregnant women. When administered intramuscularly, it mimics the normal mid-cycle surge of LH and causes ovulation to occur. Ideally, daily intercourse should be practiced over the 48-hour period following the LH.

Your doctor will advise you when to have intercourse or in certain incidences when in artificial insemination procedure will be performed in order to maximize the chance of pregnancy.

HOW ARE HUMEGON AND PREGNYL GIVEN?

Humegon is administered by intramuscular injection, often in the buttock. It cannot be taken orally because it is a protein and would be digested in the stomach.

Humegon injections are usually started in the first 5 days of the menstrual cycle and are often continued daily for a total of 7 to 12 days. However, the dosage of the drug and the schedule for administration may vary, depending upon your body's response to treatment. It is not unusual for your doctor to vary the dosage or schedule from cycle to cycle.

Pregnyl (chorionic gonadotropin for injection. USP) is administered by intramuscular injection when your physician feels appropriate stimulation criteria have been reached. In certain cases of over-response, the injection may be withheld.

If you do not conceive. Humegon and Pregnyl may be given again in the next menstrual cycle. However, treatment cycles are not always consecutive, as therapy is individualized for each patient.

Therapy may continue for as long as six cycles, after which time other options may be discussed with you.

If ovulation has occurred, the hormone progesterone is produced by the ovary. This can be measured by a blood test, about 7 days after the day of ovulation.

If you are not pregnant, you can expect a menstrual period about 14 days after the injection of hCG. If your period does not come, a blood test will tell if you are pregnant. An ultrasound can then be used to check on the progress of the pregnancy.

Monitoring is important for regulating treatment and minimizing side effects. Two methods of monitoring are used. often in combination.

The first is done through daily blood tests which measure your estrogen levels. As follicles develop. they secrete greater quantities of the hormone estrogen. Greater amounts of estrogen indicate a greater ovarian response to Humegon (menotropins for injection.

The second method. ultrasound. uses sound waves to produce pictures of the ovaries,. This procedure allows the medical practitioner to w the number and size of your follicles. and can provide an indication of When ovulation is likely to occur. It is very important to go for all tests and ultrasound scans, because their results may show the need for adjustments in treatment during that cycle.

SIDE EFFECTS/0THER CONCERNS ASSOCIATED WITH TREATMENT

Humegon and Pregnyl (chorionic gonadotropin for injection, USP) may be associated with both minor as well as serious, life-threatening side effects and other potential risks. The following are some, but not all, of the potential side effects/concerns that you should discuss with your doctor before beginning treatment.

Occasionally some swelling, irritation, and pain at the injection site can occur during Humegon (menotropins for injection. USP) therapy. Also, the drug may occasionally cause headaches, abdominal pain, and mild to moderate ovarian enlargement. Tell your doctor if you experience any of these symptoms. In such cases, your doctor will review the treatment with you in order to make necessary changes. An injection of Pregnyl (chorionic gonadotropin for injection, USP) can also cause pain at the injection site, as well as headache, irritability, restlessness, depression, fatigue, and swelling due to retention of fluid.

Be sure to discuss with your doctor side effects and any other concerns associated with your treatment prior to beginning therapy.

Humegon can induce ovulation in women who do not ovulate or who have irregular cycles. However, the rate of effectiveness for Humegon can vary depending upon the reason(s) for infertility. Such factors as tubal status, semen quality, and patient age are also important in determining whether a pregnancy is achieved. If you do not get pregnant while on Humegon, your doctor will discuss other options with you.

Today, many healthy babies are born as a result of fertility drugs, Such as Humegon and Pregnyl (chorionic gonadotropin for injection, USP). Your doctor can answer any further questions you may have about these drugs.